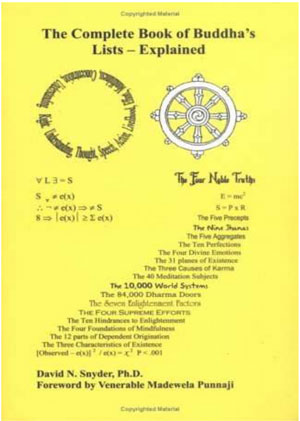 Beginning with “The Four Noble Truths”1, “The Noble Eightfold Path”2, and so on, the Buddha was a list-maker. I recently found a wonderful book, now out of print but freely available as a pdf. By David Snyder, Ph.D., it is called “The Complete Book of Buddha’s Lists - Explained”

Snyder does a brilliant job of reinterpreting these lists and framing them in the context of what the social sciences say about how we function individually and in groups.

I was particularly struck by his treatment of The Four Brahmavihārās, along with their near and far enemies.

Whether the book is a useful introduction to Buddhist philosophy and practice would be a matter of debate; but for someone who understands its basic tenets, the book is outstanding.