Organizing and reorganizing knowledge is one my seemingly endless tasks. For years, I’ve used DEVONthink as my primary knowledge repository. Recently, though I began to lament the fact that while I seemed to be collecting and storing knowledge in a raw form in DEVONthink, that I wasn’t really processing and engaging with it intellectually.1 In other words, I found myself collecting content but not really synthesizing, personalizing and using it. While researching note-taking systems in the search for a better way to process and absord the information I had been collecting, I discovered the Zettelkasten method. I’m not going to go into it here because it has been exhaustively described elsewhere. But I’ll just say that:

One methodological detail that I need to explain about Zettelkasten is the linkage between notes. Since every note gets a unique identifier (for me, just a date/timestamp), then notes get linked together in logical ways by the user. For example, I have a Zettel with the title 20201202204635 Present passive participle -авать verbs. Its unique identifier is 20201202204635. Now in DEVONthink, notes can be linked with WikiLinks. If you begin typing [[ followed by the title of a note you get a popup list of matching selections. It’s a fast way of inserting a link to another Zettel.

The solution is two-part

This part of the solution belongs to Mark Honomichl. His post Using Aliases in DEVONthink for Zettelkasten describes a Smart Rule in DEVONthink that extracts the unique ID from the document title and uses that for the alias.

The second part of the solution requires the first. In other words, every Zettel must have an alias formed from its unique ID.

Having established that, you can fix WikiLinks in existing Zettels to use the alias. Again, converting a WikiLink like [[20201202204635 Present passive participle -авать verbs]] to [[20201202204635]] Like the first part of the solution, this is implemented in AppleScript. For now, I’ve chosen to run it on demand, but it could easily be reconfigured as a Smart Rule in DEVONthink.

To illustrate, here’s a note before and after the conversion process: 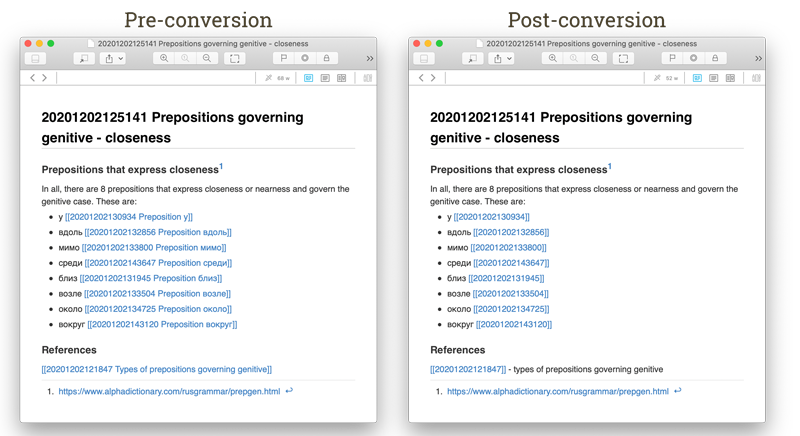 To use the script, just select one or more documents and run.